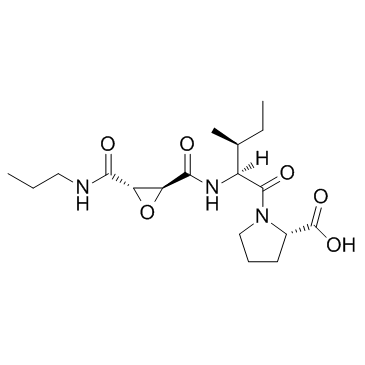 In vitro: CA-074 is a synthetic analogue of E-64, a natural peptidyl epoxide that irreversibly inhibits most known lysosomal cysteine proteinases, and is developed by means of rational drug design, exploiting the dipeptidylcarboxypeptidase activity of cathepsin B. CA-074 can be used to selectively inhibit cathepsin B within living cells, as long as the experimental conditions permit significant fluid-phase endocytosis of the drug. CA-074 inhibits cathepsin B with a Ki of 2 to 5 nM, whereas the initial Kis for cathepsin H and L are about 40-200 μM. CA-074 exhibits 10000-30000 times greater inhibitory effects on purified rat cathepsin B than on cathepsin H and L.

In vivo: Intraperitoneally injection of compound CA-074 into rats potently and selectively inhibits cathepsin B activity. Intravenously administration of CA-074 immediately after the ischaemic insult saves 67% of CA1 neurons from delayed neuronal death on day 5 in eight monkeys undergoing 20 min brain ischaemia: the extent of inhibition is excellent in three of eight and good in five of eight monkeys.