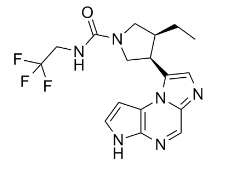 In vivo: AbbVie’s second JAK inhibitor in development Upadacitinib has been described as a second-generation inhibitor. Multiple-dose Phase I studies are completed in 2013. In phase I trials, Upadacitinib is found to be safe and well-tolerated up to multiple doses of 24 mg twice daily using the immediate release formulation. Upadacitinib exposure is dose proportional in the evaluated multiple dose.