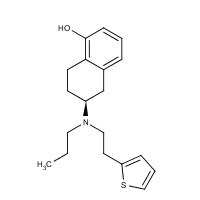 Rotigotine is a nonergoline dopamine receptor agonist with structural similarity to dopamine. Rotigotine binds to the D1 through D5 dopamine receptors, having several times more affinity than dopamine does to the D2 and D3 receptors. Rotigotine's high lipid solubility and extended duration of action when applied to the skin in experimental models of PD suggested that rotigotine was a candidate for transdermal application.Randomized clinical studies also have demonstrated the efficacy of rotigotine in improving the symptoms of moderate-to-severe primary RLS.Rotigotine provides minor protection against MPP⁺ and rescues a significant number of THir neurons against rotenone in primary mesencephalic cell cultures relevant to PD.