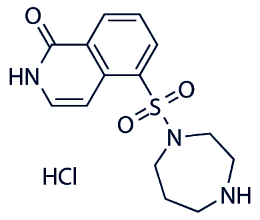 In vitro: Hydroxyfasudil prevents the downregulation of endothelial NO synthase (eNOS) under hypoxic conditions. In a concentration-dependent manner, hydroxyfasudil increases eNOS mRNA and protein expression, resulting in a 1.9- and 1.6-fold increase, respectively, at 10 μmol/L (P<0.05 for both). This correlates with a 1.5- and 2.3-fold increase in eNOS activity and NO production, respectively (P<0.05 for both). Hydroxyfasudil also inhibits various chemoattractant-induced migration of neutrophils. Hydroxyfasudil potently inhibits Rho-kinase (IC50, 0.9 ± 1.8 μM), while its inhibitory effect is markedly (at least 50 ± 100 times) less for myosin light chain kinase (MLCK) or protein kinase C (PKC).