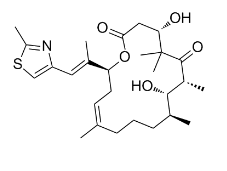 In vivo: To evaluate whether Epothilone D (EpoD) improves MT and axonal function in PS19 mice, groups of 3-month old male PS19 mice received weekly i.p. injections of vehicle or Epothilone D (1 mg/kg or 3 mg/kg) for a total of 3 months. In addition, 3-month old non-Tg littermates received 3 mg/kg Epothilone D or vehicle. The 3 mg/kg Epothilone D dose corresponds to ~10-fold less than that used in a Phase II clinical study, which should minimize side-effects such as neutropenia that are observed with MT-stabilizing drugs in human subjects. PS19 and WT mice that receive Epothilone D show no signs of drug intolerance. Indeed, all drug-treated mice exhibited weight gain that is indistinguishable from vehicle-treated animals. Likewise, relative organ weights are similar in vehicle- and Epothilone D-treated mice. The motor performance of Epothilone D-treated mice, assessed using a standard rotarod test, is not significantly different from vehicle-treated cohorts. Finally, although there is minor group-to-group variability, there are no significant differences in white blood cell counts or neutrophil content between any of the treatment cohorts. Thus, the low doses of Epothilone D utilized in these studies appeared to be well tolerated.